Grande Cosmetics Reviews – Must Read This Before Buying 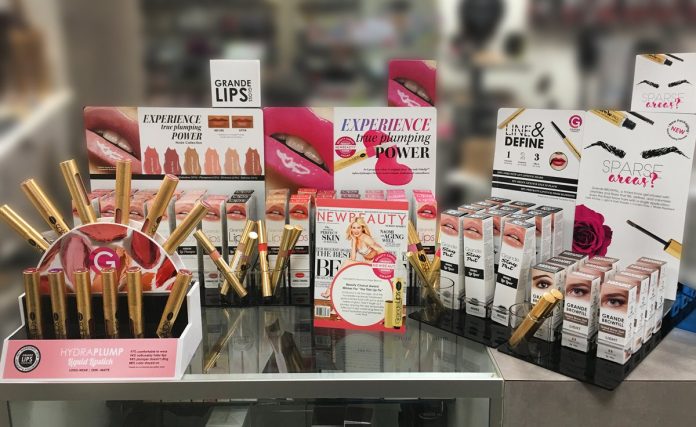 What is Grande Cosmetics?

Grande Cosmetics is a makeup brand that is known for its mascaras and brow filler formulas. If you’re in the market for new mascara, then you’ve come to the right place!

The GrandeLash-MD was the first product the brand introduced to the masses. Made to deliver thicker and longer lashes, the mascara quickly gained critical acclaim.

For example, the brand has an impressive fan following of 227k followers on Instagram, and has been spotlighted by several media outlets including Allure, Harper’s Bazaar, PopSugar, and Who What Wear.

This Grande Cosmetics review will take a closer look at their products, customer ratings, promotions, and more, to answer if this brand is worth checking out.

Founder Alicia Grande observed the beauty industry for over 30 years before deciding to start her own line in 2008 out of her garage. But with time, she was able to launch her company in the bustling metropolis of New York City, New York.

Even today, Grande Cosmetics continues to gain an online cult following for their one-of-a-kind formulas.

In an interview, the Grande Cosmetics owner stated, “We never create products that are “just makeup”. From the very beginning, we’ve been paving the way for results-driven serums and double-duty skincare-infused cosmetics to help you reach your full potential while still feeling like… well, yourself.”

Before we get into this Grande Cosmetics review, let’s go over some initial pros and cons:

If you’re looking for formulas designed to volumize, hydrate, and enhance deflated hair, this is a good place to start.

This Grande Cosmetics review will take a look at 2 bestsellers within the GrandeHAIR shampoo, serums, and conditioners category. 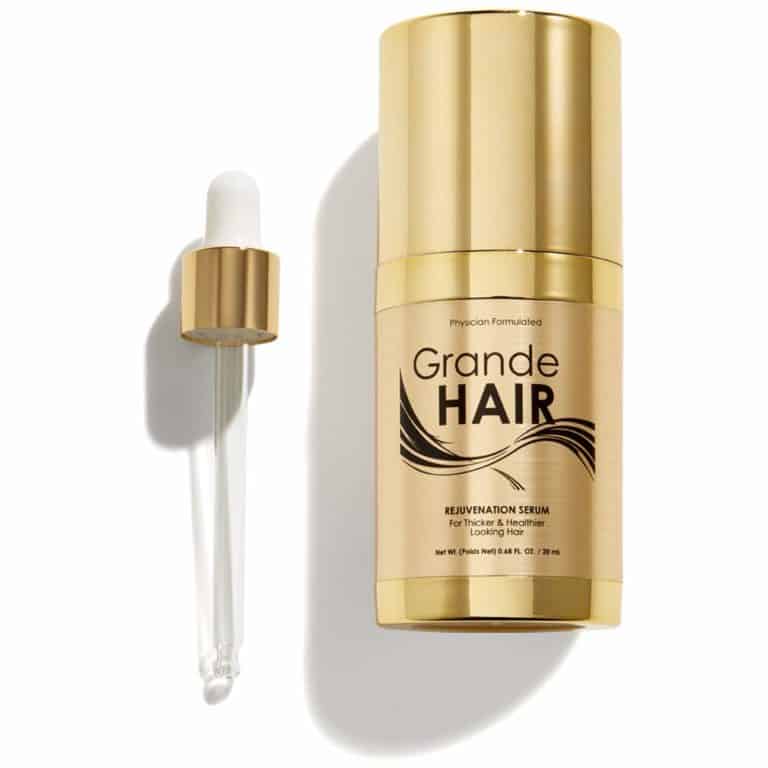 The Hair Enhancing Serum is formulated with a mixture of Vitamins, Peptides, and Amino Acids that promise thicker, healthier hair. According to a study conducted by the brand, 97% of 39 participants observed that it reduced thinning.

This serum can be used on dyed hair by both men and women, but please skip this one if you’re pregnant, nursing, or undergoing chemotherapy. Exercise patience for a couple of months to see results.

The Hair Enhancing Serum comes in: 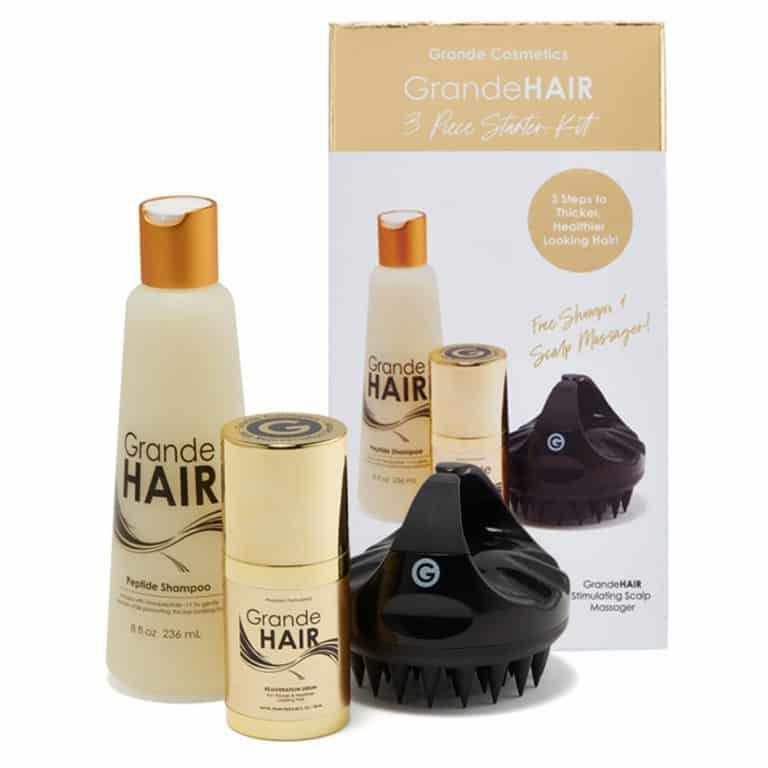 The Starter Set contains all of the essentials needed for that healthy hair glow-up. Including:

This Grande Cosmetics review recommends applying the serum first, then long shampoo, and massage at the end. Their hair cleanser helps get rid of oil buildup and debris, while their bristled exfoliator directs blood flow to your scalp.

The Starter Set has an overall value of $97 but is currently offered for $65.

Lashes can easily elevate your makeup look when you only have a few minutes to get ready. Grande Cosmetics has many eye-enhancing items to try out, ranging from mascaras, serums, to conditioners. This Grande Cosmetics review shares the fan favorites below. 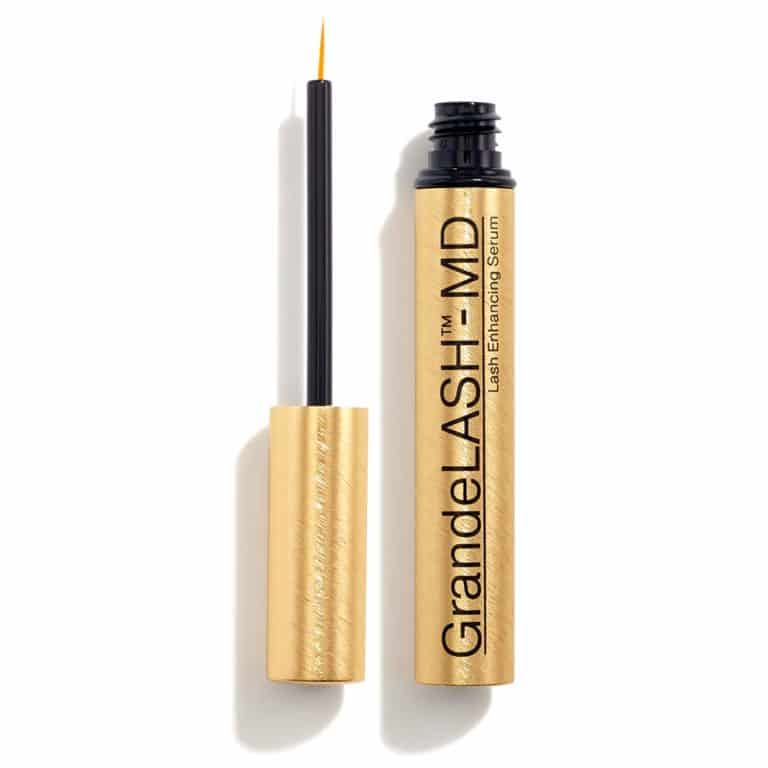 The LASH-MD Lash Enhancing Serum was picked as The Beauty Authority’s 2020 award winner for a reason. This Grande eyelash serum introduces a blend of Vitamins, Peptides, and Amino Acids for impressive lashes in 4–6 weeks.

For those that have short, thin, and brittle hairs, this Grande lash serum is also ophthalmologist tested and suitable for contacts and lash extensions.

Make the LASH-MD Lash Enhancing Serum part of your skincare routine for: 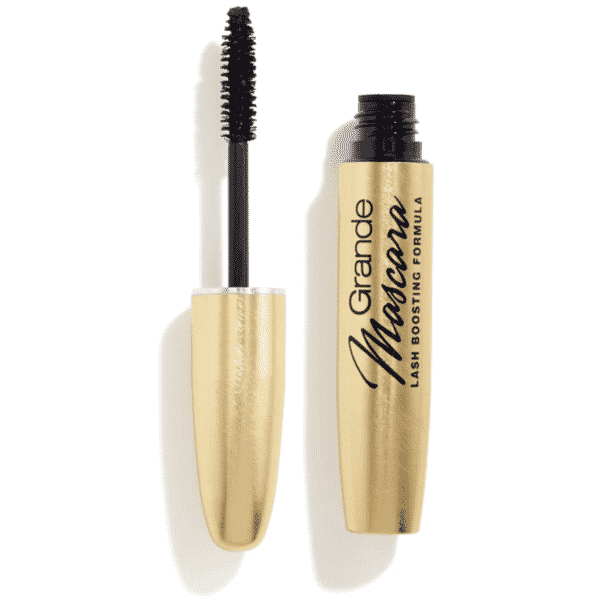 The Conditioning Peptide Mascara provides extreme volume and length and promotes a healthier fringe over time, depending on how frequently you use it.

This Grande mascara contains Peptides, Panthenols, and Natural Waxes makes the product buildable, clump-free, and water-resistant. It also promises zero lash breakage and comes with an applicator composed of soft and hard bristles.

Whether your brows are arched, straight, rounded, or you have none at all, the brand has an array of fillers and serums to help them look their best. This Grande Cosmetics review will take a quick peek at a couple of their most popular brow items. 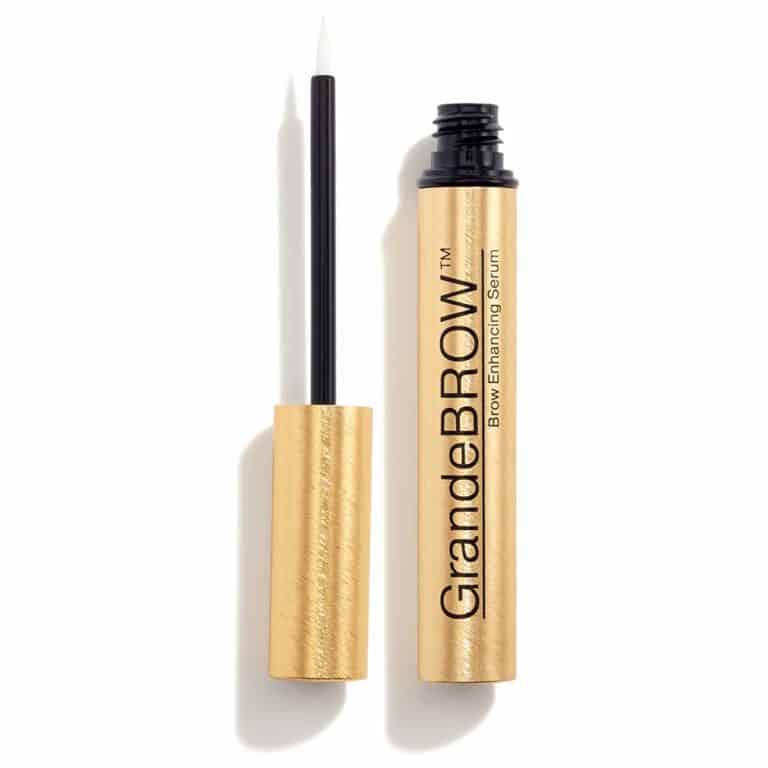 The Brow Enhancing Serum is infused with a proprietary formula of Vitamins, Antioxidants, and Amino Acids for bolder, tamed brows.

This Grande brows treatment has been studied in a clinical test and proven to show results within 6–8 weeks. In a group of 30 subjects, 100% stated that they saw fuller-looking brows.

See for yourself what this Brow Enhancing Serum can do, with a 3 ml supply that costs $70. 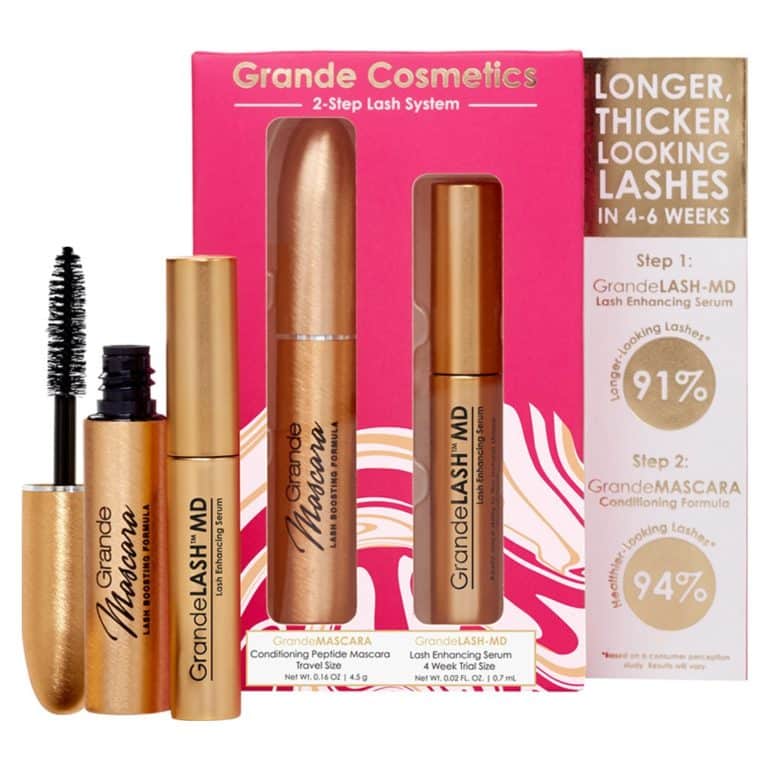 The 2-Step Brow System is designed to promote fuller hairs with a more defined shape. This set includes their:

Grande Cosmetics recommends that you use the serum first. The gel’s slight tint covers up any gray hairs or sparse areas. Unfortunately, the 2-Step Brow System is currently sold out. But when available, you can get this $47 set on sale for $27.

The brand has developed lip products for customers looking to achieve that perfect pout. This Grande Cosmetics review will highlight some best-sellers within this section, from their lip plumper to a selection of shiny glosses. 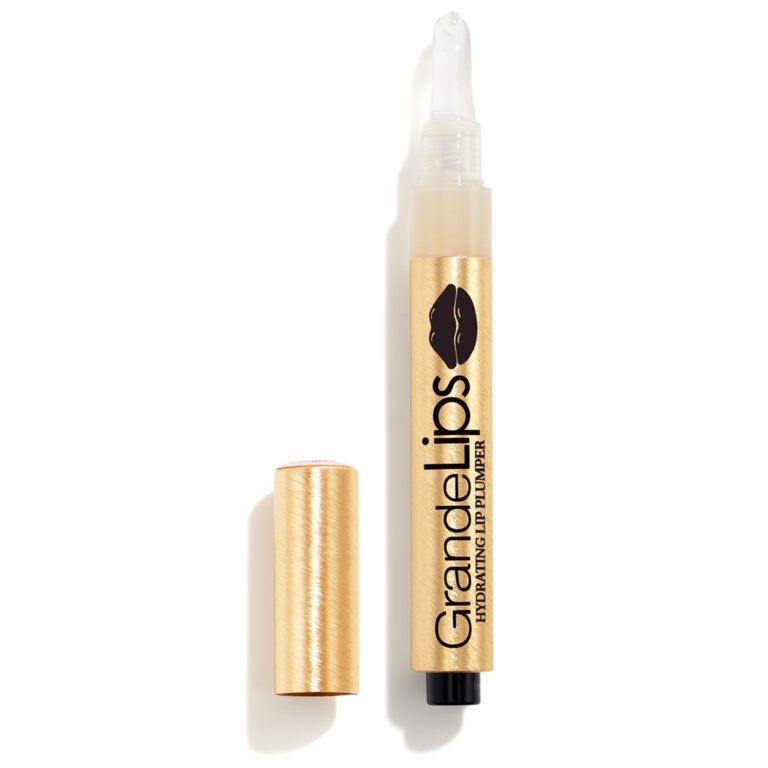 The Hydrating Lip Plumper is devised to make your lips plump and full in only 3-5 minutes. Containing a nourishing blend of Volulip™ and Hyaluronic Acid, this treatment also gives users relief from dull, chapped lips.

The Grande spicy plumper is available in over 12 different colors, including Mauve, Pale Rose, and Toasted Apricot. Plus, its soft applicator comes in a cushioned format that requires little effort to wipe clean.

It is recommended that you use this Grande lips formula twice a day for a month to see lasting results. You can get this Hydrating Lip Plumper for only $27. 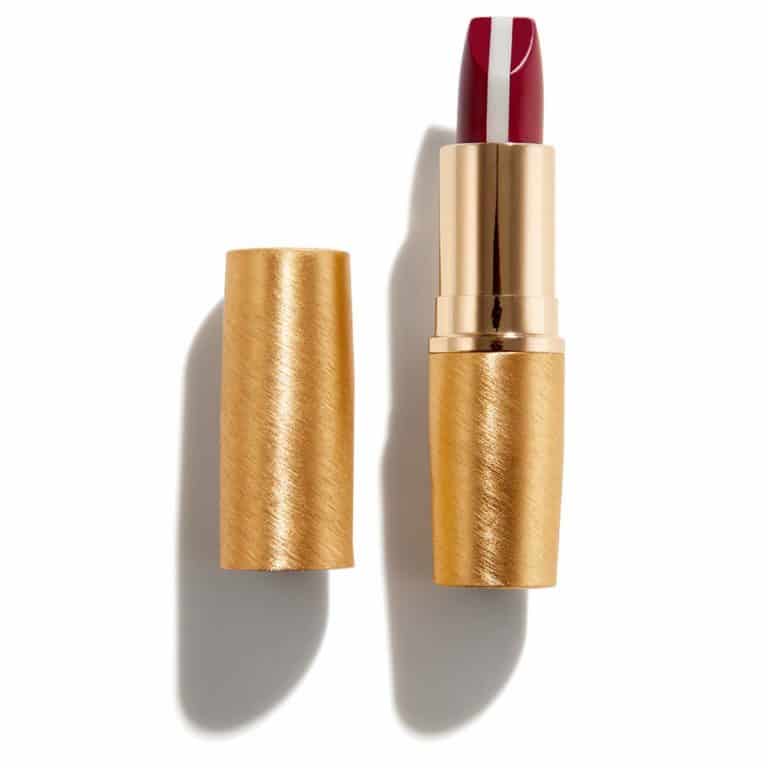 The Plumping Lipstick plumps your pout in 3–5 minutes for instant gratification. Combining Saturated Pigment with hydrating balms, this maximum coverage lip product comes in a creamy texture that’s easy to glide on.

The lipstick is offered in over 5 different colors, such as Dulce de Leche, Red Stiletto, and Wine Down. You can snatch this Plumping Lipstick for only $20.

This Grande Cosmetics review found an overwhelmingly positive customer response in its research. On the brand’s website, most of their best-selling products showcase hundreds if not thousands of reviews with positive ratings.

For instance, the LASH-MD Lash Enhancing Serum has over 1,083 comments posted with an average of 5 stars. Users have stated that this product achieved fuller lashes. One reviewer stated that:

“With consistent use over the last few months, my lashes are becoming thicker. This product has worked for me, and I highly recommend it. Great results.”

There are continued rave reviews on other outlets like Sephora. Several of Grande Cosmetics’ products attracted thousands of testimonials with a general ranking of 4/5 stars. For example, the Hydrating Lip Plumper scored that rating with 1.3k reviews.

One happy Sephora customer stated, “The formula provides noticeable short-term plumping and I’ve noticed my lips have been feeling more full and moisturized a few hours after it’s worn off.”

Another Sephora reviewer wrote that the Plumping Lipstick was “a beautiful gloss that lasts a decent amount of time, this color is beautiful and it doesn’t have an overpowering scent which I appreciate. Lips look plumped and glossy. I will definitely get in more colors.”

On Influenster, there’s a total of 6.6k reviews with most items earning positive ratings. Customers on both websites have reported that their Grandelash MD Serum works wonders.

Others have noted that their lip plumpers helped to achieve a fuller look. One reviewer also stated, “This gloss feels very hydrating on the lips and works incredibly! Highly recommend you try!”

Is Grande Cosmetics Worth It?

If you’re willing to try out a new makeup brand, this Grande Cosmetics review encourages you to check out this company.

Among their dozens of cosmetics, we recommend their plumpers, lash serums, and mascaras as they seem to garner most of the positive testimonials online. Plus, the brand’s products are cruelty-free, PETA-certified, and can be bought with Afterpay.

In terms of prices, most of their products are neither cheap nor expensive. If we were to focus on the negatives, a few users experienced an uncomfortable sensation after using their Grande MD serum lash enhancers or the Lash Lift Tool.

When it comes to these two products, this Grande Cosmetics review cautions you to do a swatch test before applying. What works for some does not work for all. If you still have issues with the brand, they have a 90-day full-refund and return policy.

But all things considered, Grande Cosmetics lives up to its grandiose title.

This Grande Cosmetics review found out that standard shipping is free for orders over $50 for U.S. customers.

With the Rewards Program, you can accumulate points and gain access to exclusive deals and perks with the brand.

Customers can also receive $15 of store credit for each successful referral under the Refer-a-Friend Program.

Additionally, Grande Cosmetics has a sale outlet where people can get select items for a reduced cost. The coupon code currently advertised is ‘FAM20’ for 20% off sitewide.

Where to Buy Grande Cosmetics

Customers can purchase products, such as the Grande Drama Mascara and the Grande Cosmetics lash serum, directly at: GrandeCosmetics.com.

You can also find them at:

Who is the owner of Grande Cosmetics?

How long does Grande Cosmetics take to ship?

This Grande Cosmetics review found out that they offer free standard shipping on U.S orders over $50. Anything below this amount is charged a flat fee of $4.

It usually takes 5–7 business days to deliver, but 2-day expedited shipping is also another available option at a set rate. Customers will receive a tracking number for their package in a confirmation email.

Unfortunately, Grande Cosmetics does not offer international shipping at this time.

If you’re unsatisfied with your order, you can return it within 90 days of purchase for a full refund. Customers can initiate this process by filling out an authorization form on the Grande Cosmetics website.

For any questions that weren’t answered in this Grande Cosmetics review, you can contact the company via:

Customer service is available between Monday–Friday, 12 AM to 4 PM EST.

Liingo Eyewear Reviews – Must Read This Before Buying

Liingo Eyewear Reviews – Must Read This Before Buying

Grande Cosmetics Reviews – Must Read This Before Buying 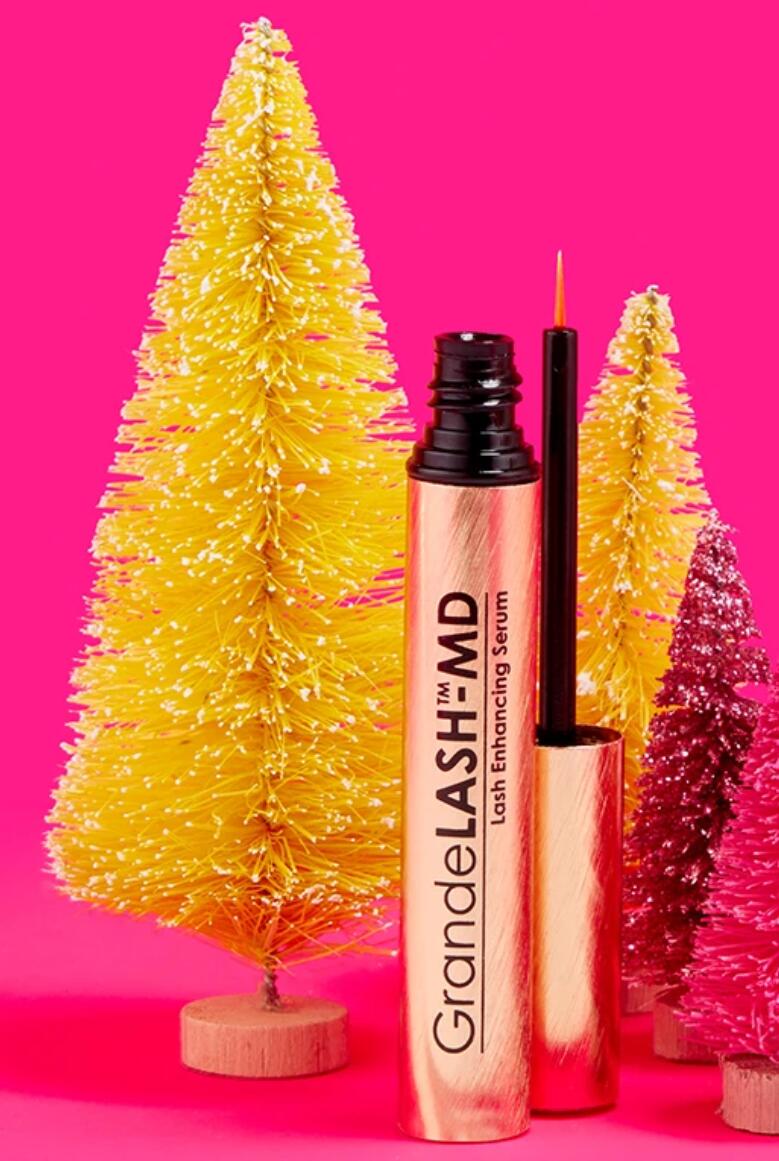 30% off Sitewide (No code required)